Here at Coveros, our accountants were facing significant issues with QuickBooks Premier Professional Services 2015. The initial login process was painfully slow, often taking up to twenty minutes to get a stable login. The software often struggled while switching between single-user mode and multi-user mode (which was done to allow multiple users to access the company file simultaneously), crashing nearly every time the task was attempted. In addition, network error messages would pop up frequently which could be cleared, but were a major disruption as they took time to close out. The most frequently used components of the software, the Payroll and the Employee Center, operated at very slow speeds. Just the sign in process for these components took a minimum of 2-3 minutes. Due to the slowness in these areas, it became a challenge to approve employee timesheets and complete payroll-related activities in a timely manner. All these obstacles lowered the productivity of our accounting office and in some cases, prevented them from completing their work.

The legacy setup consisted of an AWS (Amazon Web Services) instance (Windows Server 2012 R2) which acted as the QuickBooks server. The accountants connected over a VPN to the QuickBooks server in AWS from their local machines. They then accessed the company file, which contains all of the QuickBooks data for our company, through a network Samba share. The local machines had the client version of QuickBooks installed, which allowed the accountants to open the company file through the network share and complete their work. With this setup, we noticed the issues described previously and decided to change the architecture of the system. 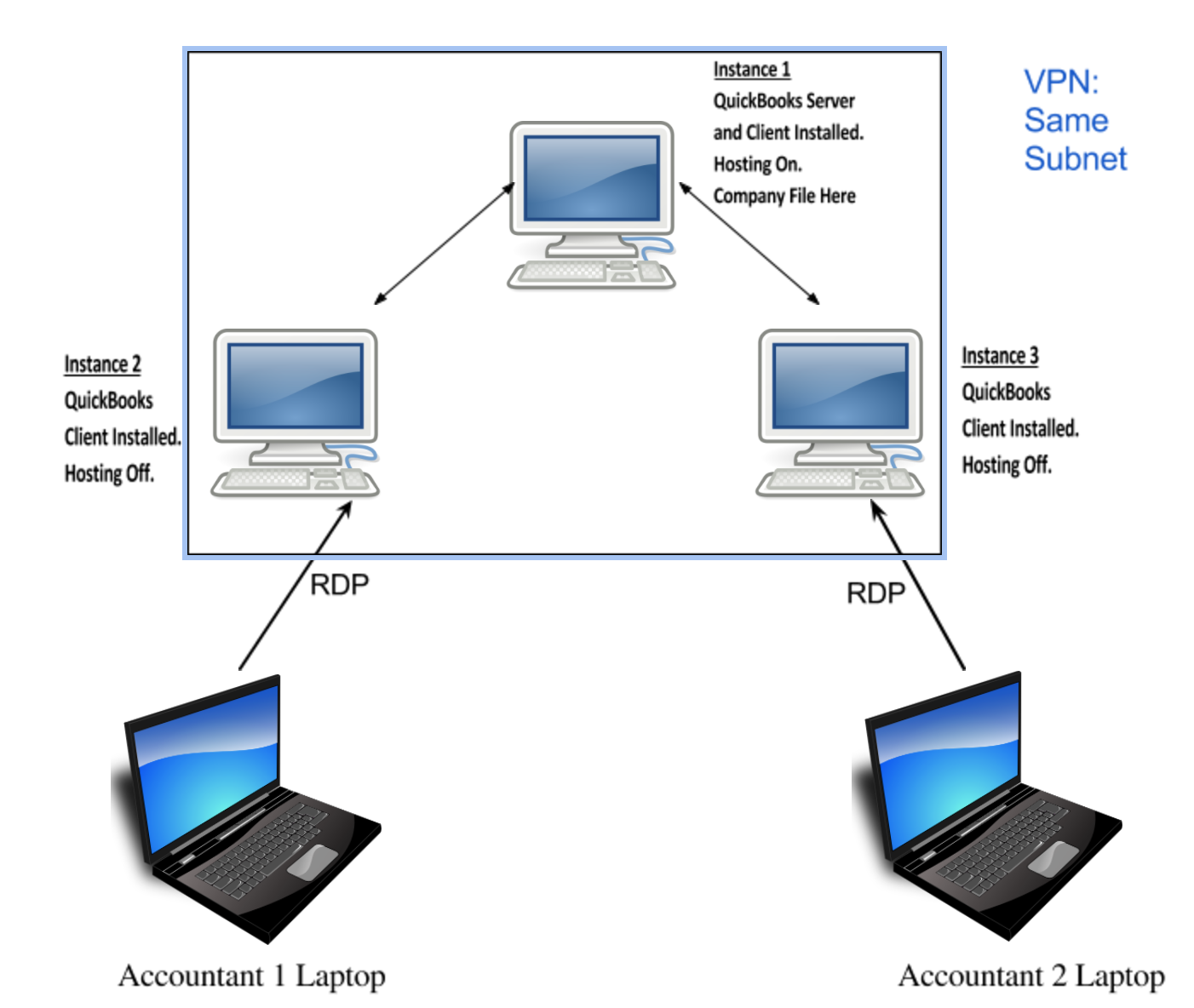 During the testing phase, we discovered that the client version of the application on the client machines requires the QuickBooks server to have the company file open and hosted in multi-user mode in order for multiple users to gain access to the file. If the file isn’t hosted in multi-user mode on the server, neither of the clients can open that file in multi-user mode. The user who hosts the file that is open on the server is given no permissions to modify the company file for security purposes. We have found QuickBooks to be more reliable and faster when set up this way. Logging in successfully is a matter of seconds now and approving timesheets and completing other payroll activities can be done in minutes as the obstacles that proved to be an issue with the older architecture of QuickBooks are no longer present.

The QuickBooks server will always remain on while the client instances are started and stopped on a daily basis via Amazon Web Service’s command line interface for cost efficiency. We have provided both of our accountants with the commands to start and stop the instances. They simply copy and paste those commands into the terminal in order to bring the instance to the state that they desire. To use these instances, our accountants use the Remote Desktop Connection application to connect to the client machines in AWS from their local machines, and complete all of their QuickBooks work on these remote instances. The current setup is performing much better in comparison to the older architecture and our accountants are pleased with the results.