What happens when you don’t like every feature in Windows 10? I chose to downgrade back to Windows 7.

This may trigger issues that cause the computer to slooooooow down.

Like many developers, I eagerly upgraded to Windows 10 for testing as soon as it was available. The first thing I noticed was that some of my programs weren’t working as needed.

For example, the built-in mousepad of the laptop had additional “features,” such as clicking the left button also moved the mouse due to an unresolved driver issue. This made opening any file a difficult task.

Within an hour I had uninstalled Windows 10.

A few months later, I tried the same process again, hoping that the drivers and services would work. Again, features I needed to perform my daily tasks were not as one should expect. Once again, I uninstalled Windows 10.

The system seemed to be working fine after reverting back to Windows 7. Then a few months later, I noticed an increasing slow-down of system resources. The problem grew worse until the CPU regularly operated at 100% with practically no services running. This came in the form of System Idle Processes utilizing 60-99% of my system’s resources. This is difficult to analyze as there is no single culprit.

Under the assumption my computer was infected with a virus of some kind, I ran in-depth cleaning software. Virus scanners and malware detection fixed some problems, but none of these stood out as the real issue. I managed to limp along by running system cleaners every hour. If I didn’t run them regularly, the computer slowed to a standstill until it was cleaned.

After considering the nuclear option of wiping the system and reinstalling Windows, I instead called tech support. Luckily they recognized a likely suspect and were able to find the problem quickly.

In upgrading to Windows 10 and then downgrading back to Windows 7, the new video card driver and a few other resources were no longer supported in Windows 7. Installing the correct drivers helped the problem considerably. For a few days, my computer worked properly. Until, once again, it slowed to a crawl.

Windows can have problems while indexing directories, and a small change to a file can trigger the entire directory to be re-indexed. In an effort to reduce unnecessary processes, I went to the properties for the drive and unchecked the setting “Allow files on this drive to have contents indexed in addition to file properties.” 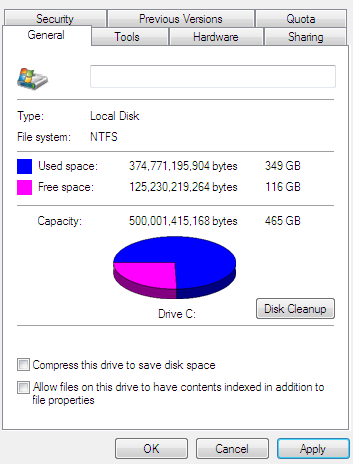 This was another solution that worked for about a day.

Giving up on an easy solution, I wiped the entire operating system and hard drive, then reinstalled it. This proved to be another temporary solution.

Under normal conditions, any of these individual steps have proven to work and help restore full performance and functionality to a Windows computer. In my case, they only provided temporary boosts and highlighted a fundamental issue with my laptop.

By downgrading my computer, and the issues created, I was able to discover a serious problem with the hardware.

When all else failed, a new motherboard was installed. This has since resolved the issue. When every software solution fails to improve performance, consider hardware issues as a likely culprit.